Tune in to 4biddenknowledge TV, and you’ll quickly see why this online streaming network has cultivated a reputation for delving into topics that arouse the curiosity of its viewers. As creator Billy Carson says, “Our goal is to take families into the ancient past, to the far reaches of our planet, and into the universe to explore places that intrigue the mind. I think if you watch some of our shows, you’re going to get hooked and come back for more.”

What Mr. Carson has especially liked about his programs is the ability to capture the imagination of younger people. “We’re getting the interest of the computer game generation,” he says, laughing. “That makes me happy. Kids who thought history was boring changed their minds when they watched Hidden Inca Tours. Whole families are watching Conscious Music together, and I received an email from a girl who thought the Egyptian Mystery School was awesome. 4biddenknowledge is doing its part to make learning and exploring cool again.”

If running an online streaming network sounds like a lot of work, it is, but Mr. Carson has been successful because of his strong work ethic. “I got that from my father, who decided when I was only a year old that I would write book reports each week,” he remembers. “Then, my parents required me to pay rent to live in the family home when I was twelve. I was also required to use my own money to pay for most of my daily needs.”

Far from regretting this time of his life, Mr. Carson is actually thankful for it. “It made me an innovator thinker and the entrepreneur I am today,” he explains. “It got me through some tough times, including when I needed new pants because they were too small.”

To solve the problem, Mr. Carson bought 79-cent packs of dye from the grocery store and bleached his pants before dyeing them to a different color. “The next day, I went to school wearing a different colored pair of pants. As far as everyone knew, I had at least three or four different colored pairs of pants every week. It was experiences like this that toughened me and gave me the mindset that I would provide for myself and solve my own problems.”

This self-reliance led to Mr. Carson selling newspaper subscriptions for the Miami News at the age of twelve, and he became the top newspaper subscription person. “I invested all of that money into electronics. At fourteen, I started an electronics company, and by fifteen, I was making more than my parents did. By sixteen, I had moved out of my parents’ house and had two cars and an apartment, and I still graduated from high school, all while running my own business.”

Since those early days, Mr. Carson has created a long list of achievements. He is the best-selling author of The Compendium Of The Emerald Tablets and Woke Doesn’t Mean Broke, the new financial bible. He runs a multi-million dollar company that is dedicated to helping people around the world. Mr. Carson is a host on dozens of shows pertaining to science, astrophysics, and ancient civilizations. He is also an expert host on Deep Space, a new original streaming series by Gaia that explores the Secret Space Program, revealing extraordinary technologies and their potential origins. Additionally, he serves as an expert host on Gaia’s original series, Ancient Civilizations, in which a team of renowned scholars deciphers the riddles of our origins and pieces together our forgotten history documented in monuments and texts around the world.

“I believe strongly in education, so I recently earned the Certificate of Science, with an emphasis on neuroscience, at M.I.T.,” he says. Mr. Carson is also using his passion for knowledge as CEO of First Class Space Agency, which is involved in research and development of alternative propulsion systems and zero-point energy devices.

His talent for entrepreneurship extends to philanthropy. “I decided to raise money for the people that were victims of the freeze disaster in Texas. I used Instagram badges to raise money on IG Live talks. Instagram matched the badge donations, and then I doubled that amount. I took questions and answers for paid badges during IG Live, and that is how I raised the money. We ended up raising a total of $2,000. I was really glad that I could use my entrepreneurial skills to aid people.”

As Mr. Carson envisions his future, he is optimistic and, as always, ambitious. “I’m always on the lookout for more ways to help people, of course,” he says. “That’s just the right thing to do when you achieve success. As for 4biddenknowledge, there is no limit to what we’ll explore. The universe is infinite, and so are our topics.” 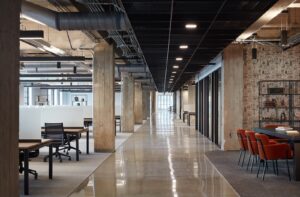 Set of 10,000 NFTs to Feature the Attributes of Black Women Across the Globe  ORLANDO, Florida–A mixed-race entrepreneur on a...

During times of economic instability, there are a few industries that seemingly remain immune to the ups and downs affecting...

Innovation matters.  When it comes to energy manufacturing, every production and technological nuance counts, and it takes careful thinking to...