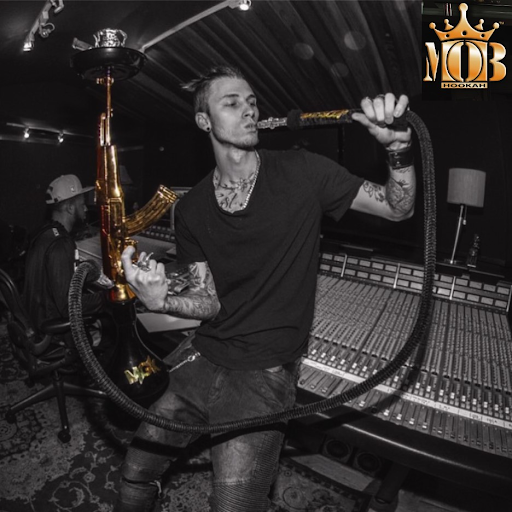 Mehdi Marrakchi and Karim Elamrani are the founders of a leading hookah brand,  MOB Hookah. Their flagship store, where they hold celebrity appearances, is located on Melrose Ave in Los Angeles, one of the most popular and trendy areas in L.A. The shop was designed to fit the brand’s needs, featuring customized pieces from the talented artist Dalsinky   and other artist collaborations.

MOB Hookah’s site features over a hundred different products and accessories. MOB Hookahs are beautifully crafted to be the centerpiece of any room. They are all unique in style and design, with raving reviews about the quality and craftsmanship. There’s a design for every personality type, such as Diamond: an elegant German-designed hookah; Onyx Venus: made out of beautiful bone material for an extra sleek look; and the futuristic Halo Tray: designed to teleport you to another dimension. These products can be shipped all over the world and across North America.

Mehdi and Karim Elamrani explain that the brand started back in his garage in 2014 with a unique hookah design and an investment of $15,000. “We started promoting the brand organically on Instagram, and it just took off from there,” Mehdi shares. “We are now projected to sell over $10 million this year, and we are just getting started!” MOB Hookah has become one of the most popular hookah brands globally, with 122k Instagram followers, 13k Facebook followers, and 40k subscribers on YouTube.

Because Mehdi and Karim Elamrani started the brand back in a garage in 2014 with a unique hookah design and an investment of $15,000, they are dumbfounded by the fact that  celebrities like Drake, Justin Bieber, Fabulous, Migos, MGK, Big Latto, Tyga, Brody Jenner, Dan Balzarian, Xzibit, Wakaflocka, Miguel, Shaq, and others support the MOB Hookah with their purchases.

Mehdi came to the US as an immigrant at just nineteen years old to pursue education and become an engineer. His parents couldn’t afford to pay his tuition, so he had to hunt for a job within his first week here just to sustain himself. He started as a dishwasher for a mere $6 an hour at a pizzeria downtown San Diego. “It wasn’t the greatest job, but I liked the feeling of responsibility,” Mehdi shares. “I knew things would eventually get better.” Within a few months, Mehdi was able to get a job with better pay, running a coffee cart. “It was perfect for me,” he explains. “I love coffee and socializing!”

After a few years, Mehdi began studying for his degree. As expenses got higher, he realized he needed more income and less work to maintain his status as an honor student. He started a limo business which at the time was a great solution given his schedule and income. After graduation, he was recruited to join the Navy Civilian Force. That’s when his friend and now business partner, Karim Elamrani, came to him with a design; it was an AK-47 shaped Hookah! That was the moment MOB Hookah was born.

The brand is now planning to take its hookah designs beyond the internet and L.A. “In the next few years, we plan to expand the business to South American and European markets.” Mehdi states. “ We have a lot of vendors who are ready to invest in a franchise, so that’s something we are also considering.” The brand’s priority is to establish more shops in L.A. and other major cities like Miami and Dubai.

MOB Hookah believes that the hookah industry is just getting started and will only continue to grow. “The only thing affecting our growth are the regulations surrounding hookahs and tobacco, but we can work with that,” Mehdi’s advice for other entrepreneurs is to be proactive and patient. He explains, “ Those qualities are important in any business.” When Mehdi first started MOB Hookah, there were a lot of unknowns. “Don’t let this throw you off, Mehdi states. “ Many startups begin with limited resources and end up flourishing.” His advice to other entrepreneurs is to be realistic about how much you can do for your business. He explains that trying to do it all might be necessary at the early stages, but as you grow, you will need to replace those roles and focus on what is most important. Mehdi ends by saying, “You never know when you’ll see the fruits of your labor, but when you do, it makes it all worth it.”

Previous post Mark Cuban says that bitcoin will be ‘the safe haven of crypto’ with one ‘huge advantage’on October 18, 2021 at 4:21 pm
Next post Senator calls on Facebook CEO Mark Zuckerberg to testify about Instagram and kids

Ishan Shivanand, Founder of Yoga of Immortals (YOI), never ceases to be amazed at how similar people around the world...

David Hernandez is a man of perseverance. He's an internet evangelist, a source of inspiration for hundreds of thousands of...