Spencer Platt/Getty ImagesOne of the bond market’s most reliable indicators of impending U.S. recessions is pointed in a pretty pessimistic direction right now, but contains at least one optimistic message: The Federal Reserve will remain committed to its battle on inflation and, some analysts say, should ultimately win it.The spread between 2- BX:TMUBMUSD02Y and 10-year Treasury yields BX:TMUBMUSD10Y is stuck at one of its most negative levels since 1981-1982 at minus 67.3 basis points on Wednesday, according to Dow Jones Market Data. The more deeply negative the spread becomes, the more worrisome of a signal it’s emitting about the severity of the next economic downturn. Read:Bond-market recession gauge hits 41-year milestone as global growth fears mountBut there’s more than one way to read this measure: The spread also reflects the degree to which the bond market still has confidence that policy makers will do what’s needed to bring down inflation running near its highest levels of the past four decades. The policy-sensitive 2-year Treasury yield ended the New York trading session on Wednesday at 4.37%, up by 360.8 basis points since January, with traders pricing in further rate hikes as well as a slowing pace of them as soon as December. Meanwhile, the 10-year yield was at 3.7% — or 67.3 basis points below the 2-year yield, resulting in a deeply negative spread — and at a level that indicates traders aren’t factoring in a whole lot of additional premium based on the possibility of higher, long-term inflation. Higher and stickier yields at the front end of the curve are “a sign of Fed credibility,” with the central bank seen committed to keeping monetary policy restrictive for longer to rein in inflation, said Subadra Rajappa, head of U.S. rates strategy for Société Générale. “Unfortunately, tighter policy will lead to demand destruction and lower growth, which is keeping long-end yields depressed.”In theory, lower economic growth equates to lower inflation, which helps the Fed do its job of controlling prices. The million-dollar question in financial markets, though, is just how quickly inflation will come down to more normal levels closer to 2%. History shows that Fed rate hikes have no apparent maximum impact on inflation for about 1.5 to 2 years, according to famed economist Milton Friedman, who was cited in an August blog by Atlanta Fed researchers.“The yield curve will likely remain inverted until there is a clear sign of a policy pivot from the Fed,” Rajappa wrote in an email to MarketWatch on Tuesday. Asked whether the deeply inverted curve indicates central bankers will ultimately be successful in curbing inflation, she said, “It is not a question of if, but when. While inflation should steadily decline over the upcoming year, strong employment and sticky services inflation might delay the outcome.”Ordinarily, the Treasury yield curve slopes upward, not downward, when the bond market sees brighter growth prospects ahead. In addition, investors demand more compensation to hold a note or bond for a longer period of time, which also leads to an upward sloping Treasury curve. That’s part of the reason why inversions grab so much attention. And at the moment, multiple parts of the bond market, not just the 2s/10s spread, are inverted. For Ben Jeffery, a rates strategist at BMO Capital Markets, a deeply inverted curve “shows that the Fed has moved aggressively and will keep rates on hold in restrictive territory despite a quickly dimming economic outlook.”The 2s/10s spread hasn’t been so far below zero as it recently has since the early years of Ronald Reagan’s presidency. In October 1981, when the 2s10s spread shrank to as little as minus 96.8 basis points, the annual headline inflation rate from the consumer-price index was above 10%, the fed-funds rate was around 19% under then-Federal Reserve Chairman Paul Volcker, and the U.S. economy was in the midst of one of its worst downturns since the Great Depression. Volcker’s bold moves paid off, though, with the annual headline CPI rate dropping below 10% the following month and continuing to fall more steeply in the months and years that followed. Inflation hadn’t reared its head again until last year and again this year, when the annual headline CPI rate went above 8% for seven straight months before dipping to 7.7% in October. On Wednesday, most Treasury yields slipped after Federal Reserve Chairman Jerome Chairman said the pace of interest-rate hikes could slow as soon as policy makers’ next meeting in two weeks. The 10- and 30-year rates finished November’s final trading session with their biggest monthly drops in two to three years.Right now, “a deeply inverted yield curve signals the Fed is somewhat overtightening, but the impact on inflation may take some time to come through,” said Ben Emons, a senior portfolio manager and the head of fixed income/macro strategy at NewEdge Wealth in New York. 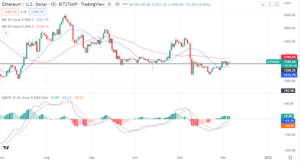 Next post Ethereum back to $1,300. Vitalik Buterin advises the community on a key issue

Qualcomm saw weakness in mobile handset performance, and the chipmaker sees a sharper revenue decline coming in the quarter ahead.